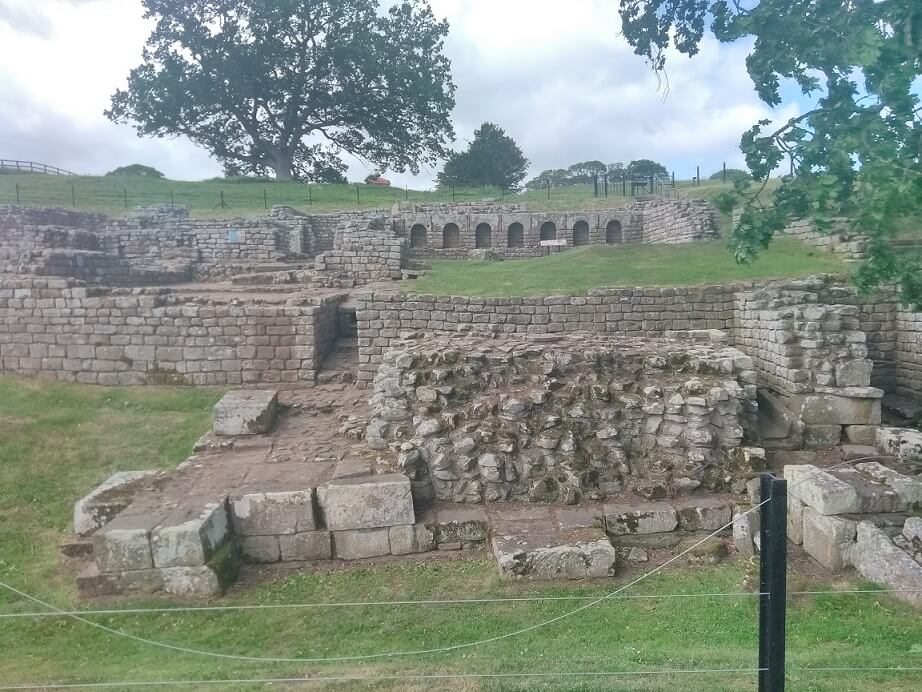 Hadrian’s wall path is a hiking route that is based upon the old Roman wall that separated the Roman empire from the barbarians on the other side. Depending on which way you walk the route starts at Newcastle upon Tyne and ends in Bowness on Solway. The route is one of the smaller hikes that you can do and in my opinion a great hike. You will meet lots of interesting characters and if your a history buff than this is the walk for you.

Reasons why I walked the Hadrian’s Wall Path

All my life I have been interested in Roman history, this coupled with Hiking makes for a great combination of reasons to walk the Hadrian’s Wall Path. I hiked for the purpose of exploring the great Roman wall that separated the Empire and exploring Britain on foot. If you have any interest in Roman history and Hiking then this is the trail for you.

Hadrian’s wall path is a 84 mile or 135 km walk that takes you across the British countryside. You will encounter the ruins of the Roman wall across the entire way and walk across forests, hillsides and meadows.

My Hadrian’s wall path started in Newcastle upon Tyne where I stayed a couple of nights in a hostel which turned out to be extremely good fun. I met up with a couple of people from all over the world and got my last bit of civilized fun in the city. I recommend going to a couple of bars and hearing the live music performances and drinking a couple of the Newcastle beers.

As is my tradition I start any walk with a hangover from the previous nights fun. The first part in Newcastle ill admit is not that great to walk. Because of all the traffic that passes you all the time and walking on asfalt and concrete is not my idea of an ideal trail. But you will get through it like any other trail.

The first Roman ruin that you see is smack in the middle of a suburb and is an old gate house used by a fort.

For navigation on the Hadrian’s wall path I used a free map that I picked up in the hostel in Newcastle from hadrianswallcountry.co.uk. And I installed the app Hadrian’s Wall by PKC Mobile on my Android phone for some additional information and tips along the wall. The trail is pretty well marked with a white acorn along the Hadrian’s wall path.
I did get lost a couple of times, but I always find my way back on the trail. You do not need to worry that much about it as long as you have a smartphone.

With the knowledge that I picked up from the Portuguese Camino that I did I highly suggest using the app Maps.me and downloading the entire walk path or KML file from the following link. Much easier and free. What more do you need?

My first day I simply set out and walked till the first stop along the way. Heddon of the Wall. There I set out for a hostel to stay the first night in. But as I soon found out it is a very good idea to make sure the hostel has place for you. As luck would have it the hostel in Heddon on the Wall was full up. But the lady who owned the hostel was nice enough to call around for a place for me to sleep. I ended up sleeping the first night in the Black Bull pub in Wylam-on-Tyne. The rest of the way I only stayed on Campsites with my tent. Where I slept better than that pub.

Camping on the Hadrian’s Wall Path

During my Hadrian’s Wall Path hike I decided that I was going to camp most of the way. This to save on costs and because I wanted to try out my new MSR Hubba NX tent for the first trip. With my sleeping mat and sleeping bag I can sleep comfortable in all weather to about 10 degrees Celsius. When I went in I was never cold because the weather was lovely.

Camping can be done pretty easily and cheaply along the Hadrian’s Wall Path, the usual camp fare was 7 to 15 pounds a night. Keep in mind that I was on my own and in a 1 person tent. Sometimes you will get a good campsite that’s set up for tents. Other times you will be stuck in between the caravans.

Take a Raincoat and test your gear

It was raining quite a lot on the first few days and I had a raincoat that did not work that well. The water was filling up the pockets in my Raincoat. Lesson learned, do not cheap out on a good raincoat. The raincoat I started out in was a cheap one which was very lightweight, but as I said did not do a good job of keeping the rain out.

On Hadrian’s wall there is a certain reputation for the rain and with good reason. So prepare for the rain and test your gear in it. The last thing you want is to be soaking wet the entire time. Learn from my raincoat mistake.

For testing your gear in the rain I suggest not just standing in it for a few minutes but taking the chance of hiking in it for a full day if you can. Here you can learn what its like and how your gear fares against a downpour.